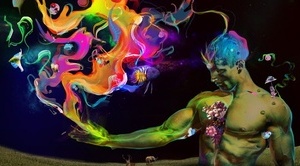 When you look up the definition of magic – it’s unsurprisingly mundane. Influencing a course of events through ‘mysterious’ forces, or making things disappear? It seems much more than just something that has a delightfully unusual quality! Screen Shot 2015-01-05 at 8.43.31 PM

Magic is something that transcends any specific definition because we are the ones to define it.

It is something that you decide exists or not. It is a way to view life, where the entire idea of the third dimension is a magical, abstract playground of possibility.

The other day I created a bunch of static electricity while petting my cat – and I thought okay THIS is magic.

Of course it can be measured scientifically, we can apply it to equations so we can logically understand it – but it’s magic. A trail of miniature electrical explosions shock my hand because of an unbalanced amount of protons and electrons?

We’re taught that everything that is ‘real’ can be examined scientifically and if we can’t logically understand it, then it must not exist or we’re being delusional.

Imagine how a child experiences the world; they navigate life through a dream like consciousness where the idea of magic and impossible or contradicting concepts logically make sense. If our global community was designed to support our right brain – we could all thrive in a system where the work we do revolves around feeling, passion and creativity.

When you think of all this from the perspective that we are all creators, and if the synapses in our brain spontaneously and collectively shifted into everyone believing and understanding the ‘science’ behind things like magic, aliens, fairies etc, it would all manifest.

For that to happen we’d have to see the pattern of the universe – we’d have to understand energy on the smallest, fundamental levels to be able to fractal it up onto 3D physicality.We would need to literally SEE the geometries that make up this reality.

If we could see/feel/sense the energies that make up both matter and consciousness itself, we would understand that an alien or something impossible is just a certain sequence of spinning, fundamental geometries that – depending on how fast they spin will appear as solid matter. The faster they spin the more energy is let off in the form that we see as light.

What we call an angel is a consciousness that, fundamentally is made up of the same geometries as us.

Existing at a higher frequency means your consciousness is not limited to linear thinking, and you can hold exponentially more information.

From our perspective, higher dimensional consciousnesses we label as angels or light beings are just as physical as us but appear to be emitting light because of the amount of energy they produce.

When we can combine our scientific, logical and mathematical understanding of the world with our intuition, creativity and the realization that on a fundamental level we are all one – then our interaction with reality changes completely.

It’s all math, and it’s all magic.

The Fibonacci spiral, the flower of life, it’s all living math that is the fabric holding consciousness together.

Within this evolving, infinite fabric holds every impossible idea and every contradicting possibility – there’s enough room within Source, the universe, consciousness – for every single thing to exist.

Reply Cialis
12:32 AM on September 7, 2021
Pet Meds Amoxicillin No Prescription