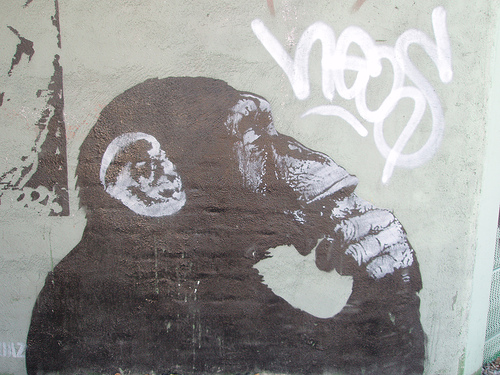 It affects everything else in life too. It affects your actions, your self-image, your possibilities in life, your stress levels and your health. Your thinking habits determine whether your predominant experience in life is one of fear, excitement, abundance or scarcity.

My life got a hell of a lot better when I started paying attention to the role of my thoughts in life. There was a time when I would have balked at the following five truths about thinking, but now I’d consider them to be pretty basic facts of life.

1) WE ARE THINKING ALMOST ALL THE TIME.

Young children are great observers. Most of the time their attention is occupied by what they’re currently seeing and hearing. They can definitely think and ruminate, but the present-moment sensory world seems to be more important to them. It’s not unusual to see an adult lost in thought, barely aware that he’s there, but it would be strange to see a two-year-old in with that same glazed, absent look.

By the time we reach adulthood, thought occupies the foreground of our experience nearly all the time. Even when we’re actively paying attention to the sensory world, we’re constantly interpreting, predicting and judging.

As children get older, they devote more and more attention to their own internal “mapping” of the world, until it becomes more important than making fresh observations of the present moment.

Imagine tourists walking around, navigating with a map held out in front of them. They see the real-world landmarks beyond the map, but they use them only as a reference to find out where they are on the map, and how they can get to other places on the map. Most adults engage with the world in the same way, out of habit — the contents of our thoughts and impressions make the main landscape, and the present-moment sensory experience is secondary.

2) MOST OF OUR THOUGHTS DON’T REALLY ACCOMPLISH ANYTHING.

We absolutely need to think, and our minds can do amazing things. But most trains of thought aren’t leading to any kind of decision or insight that’s applicable in the real world. They’re just kind of kicking up dirt.

What good is a thought if it’s not going to prompt some kind of decision or resolution? There are other purposes to thinking — to distract ourselves from more upsetting thoughts, or to gratify ourselves with fantasies. But these are real-world ends too, and most of the time these aren’t intentional, or particularly helpful.

The majority of thinking is just unconscious free-associating, which takes up our attention and often stresses us out. It’s habitual busywork of the mind, and it will eat up as much of your attention as it can get, until you cut off the supply.

Who cares about the name of the actor who played the middle child in that 80s sitcom, the theme of which has been running in my head since I woke up? My mind does, for some reason. It would put aside the rest of my life to resolve this matter if I didn’t step in.

The mind is happy to get to work on anything at all, even if there’s no conceivable payoff for you. Just like a salesman who will keep selling you stuff — anything at all — until you stop buying, your mind has a tendency to want to keep working as long as it can. It just really likes figuring, placing, matching and creating things.

We can all agree how wonderful it is that the mind can do these things. But it needs your attention to do them, and there’s only so much of that to go around. If it knew it had to work within a budget, the mind would be a little more prudent with the projects it takes on. (Ah! It’s Tracey Gold!)

We adults are so used to this constant mind activity that it can feel a bit weird when it stops, for the same reason that it’s difficult to peel yourself away from an unplanned Netflix marathon. It’s not necessarily because the series you’re watching is particularly good. It’s because, in that moment, continuing to watch feels more comfortable than having to decide what to do instead.

We’ve all been so consumed by thought that we lose track of what’s really happening in the present. You can be totally engrossed in the details of an old relationship, or the schedule in your office across town, or a future in which there are no wild fish left in the oceans, and barely be aware that it’s 4pm on a Sunday and you’re sitting in the bathroom.

Your emotions, in these cases, probably correspond better to the topics in your head than what’s actually going on around you. That’s because all thoughts happen in the present — even thoughts about people who aren’t present, or things that aren’t happening right now.

So when you think of something that upsets you, you’re really experiencing a reaction to the thought, and not its actual subject matter. Obviously it isn’t your mean ex-girlfriend that’s making you sad in the bathroom right now, it’s your present-moment thought about that person and time that’s upsetting you. She’s not here. At all. The thought is.

Your body certainly gets fooled on a regular basis. You can just think about a plate of fries and your salivary glands will actually get the party started in real life, unaware that there are no fries for them to help digest. Or you can think about sex and your genitals will get busy redecorating, moving fluids and other things around, ready to greet a visitor that isn’t actually on the way. If you decide to humor your body in its misapprehension, it may even attempt to conceive a child by itself.

When you’re lying in bed, unable to sleep because of all the political violence around the world, it’s actually not the state of the world that’s making you unable to sleep. It’s the present-moment thought you’re having, right here in your bedroom. Otherwise, why hasn’t “The State of the World” been bothering you every moment since you were born? We can only react to what’s present.

I’m not trying to demonize thought here. Thoughts are absolutely necessary for us to even operate. But the noise-to-signal ratio is staggering, if you get in the habit ofchecking in now and then. Knowing that most of our thoughts aren’t really serving us, we can learn to reclaim our attention from them and return it to what’s happening right now.

It’s not particularly hard to do that, but it’s definitely hard to remember to do that. It has to become a habit, because Living in Our Heads Without Realizing It is something we adults are better at than almost anything else. But becoming present can become a habit if you do it often enough.