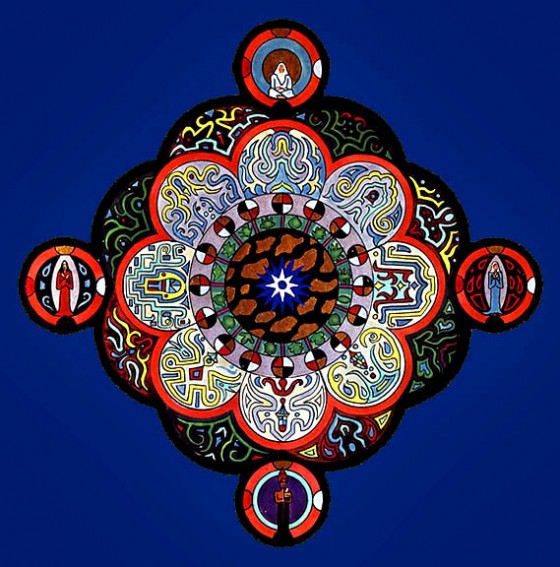 Mandalas have been used in many ancient cultures like Buddhism, Hinduism, Native American, Australian Aboriginal as a symbol of the universe and wholeness. Literally speaking, mandala is a geometrical form – a square or a circle – abstract and static, or a vivid image formed of objects and/or beings. It’s a cosmic diagram that reminds us of our connection with the infinite.

Interestingly, Carl Jung, the Swiss psychiatrist, explored the psychological effects of mandalas, while studying Eastern religion. He is credited with introducing the Eastern concept of the mandala to Western thought and believed its symbolic of the inner process by which individuals grow toward fulfilling their potential for wholeness.

Carl Jung refers to the mandala as “the psychological expression of the totality of the self.”

According to Jung, “In such cases it is easy to see how the severe pattern imposed by a circular image of this kind compensates the disorder of the psychic state– namely through the construction of a central point to which everything is related, or by a concentric arrangement of the disordered multiplicity and of contradictory and irreconcilable elements. This is evidently an attempt at self-healing on the part of Nature, which does not spring from conscious reflection but from an instinctive impulse.”

Jung used mandalas in his psychotherapy by getting patients, who had no knowledge of it, to create individual mandalas. This enabled him to identify emotional disorders and work towards wholeness in personality.

He realised there was a great deal of similarity in the images they created. “In view of the fact that all the mandalas shown here were new and uninfluenced products, we are driven to the conclusion that there must be a transconscious disposition in every individual which is able to produce the same or very similar symbols at all times and in all places. Since this disposition is usually not a conscious possession of the individual I have called it the collective unconscious, and, as the basis of its symbolical products, I postulate the existence of primordial images, the archetypes.”

Mandalas represent connection with the infinite

Mandalas represent connection with the infinite

A great deal of Jung’s psychotherapy dealt with the interpretation of individual mandalas created by his patients.

Golden Flower made by Jung’s patient. He found that mandalas usually appear in situations of psychic confusion

Mandala is like a design that triggers something within us, a sacred geometry in which we recognise our self and our place in the cosmos.

It is an ancient and fundamental relationship from which we have strayed and the mandala is the key that can help us return to it. Especially, when the inner self is challenged by ego, harmony has to be restored.

During such times, mandalas can guide you to listen to the inner voice and find yourself. Like Jung stated, “It became increasingly plain to me that the mandala is the center. It is the exponent of all paths. It is the path to the center, to individuation.”

Jung and the Mandalas